The Good Shepherd International Concert Series seeks to present captivating music, played by some of the brightest rising stars on the international scene, to the people of the Minneapolis–Saint Paul metropolitan area. Pope Benedict XVI described classical music as an "encounter with the divine," which can help us experience "very deeply the Lord's presence." We believe that musical expression is necessary for the culture of our community to thrive. As God's grace and love toward humanity is reflected through musical creativity, we can tangibly witness Him "making all things new."

All concerts are open to the public with no admission charge. A free-will offering will be taken to help cover our expenses. Each concert is followed by a reception where the audience may enjoy refreshments and fellowship and an opportunity to greet the performers.

We are able to present these recitals free of charge due to generous donations from the congregation and the free-will offerings. Mark your calendars for our 2019-2020 events:

Since forming Svyati Duo in 2009 Rebecca Hepplewhite (cello) and Julian Collings (organ) have gained international critical acclaim, both for their concert performances and commercial CD releases. Heralded as 'exemplary' performers by Fanfare Magazine, their concert engagements have taken them to venues throughout Europe, the United States of America and Asia. Svyati Duo take their name from Julian and Rebecca's first collaboration, as conductor and cellist in a performance of Sir John Tavener's masterpiece 'Svyati' for solo cello and choir. Tavener subsequently became the duo's Patron the following year and remained so until his death in 2013. Rebecca and Julian maintain a diverse and exciting repertoire, from Baroque sonatas through to substantial romantic and contemporary works, and are committed to performing music that displays the diversity of their instrumental combination.

Known for a sound that is “rich and encompassing, yet delicate and refined” and a “flawless and expressive” technique, pianist Joseph Kingma is in constant demand as both a performer and teacher. First prize winner of the American Liszt Society’s first Franz Liszt International Piano Competition, held at Ohio State University, he has also won awards in the Cincinnati World Piano Competition, Sorantin International Young Artists Competition, and the Monroe Symphony League’s Emerging Artists Competition. Joseph joined the faculty of Palm Beach Atlantic University in the fall of 2018 as Assistant Professor of Piano and Coordinator of the Keyboard Division.

His poetic artistry and technical mastery has led to numerous concerto performances with orchestras across the nation. Passionate about both performing and teaching, he has drawn engagements from major universities, concert series, and orchestras from across the nation and maintains a busy concertizing and teaching schedule. A member of the American Liszt Society, he has performed at its annual festival. His musical interests are wide-ranging, and his repertoire includes a wide variety of composers in the solo, concerto, and chamber genres. He is currently represented in North America by Elegy Artist Management. In 2017, Joseph graduated from the University of Texas at Austin with his DMA, where he studied with Anton Nel. Previously, he earned his BM and MM at Rice University under the tutelage of Robert Roux. His earlier teachers include Aviram Reichert, Philip Pletcher, and Elena Arseniev. Joseph currently lives in southeast Florida with his wife (Rebecca), daughter (Eliana), and dog (Spunky).

Gedymin Grubba (b. 1981) is an international organist, composer, and conductor performing about 100 concerts each year around the world. He is currently one of the most active Polish concert organists. So far he traveled around the globe five times on world concert tours across Europe, South America, North America (including 20 concerts in the US), South Africa, Asia, Australia, and Oceania. Last year (2016) marked the 20th anniversary of his artistic work, amounting to 1,500 recitals given so far. Geydmin has recorded several of CD’s (19 incl. DVD) and numerous recordings for radio and television in the world. He frequently conducts master-classes and is invited to be an adjudicator for organ competitions in the world. Since 1999 he is the Director of the International Festival of Organ Music at the Cathedral in Pelplin which is one of the most significant and prestigious cultural events of its kind in Europe. Since 2003 he is also Chairman of the Promotion of Art Gabriel Fauré Foundation which organizes about 50 concerts a year.

Composer and pianist Haskell Small has been praised for the exquisite blend of sound and silence in his compositions and for his prodigious technique and subtle touch at the keyboard. His discography of over a dozen recordings and his frequent national and international tours have firmly established Small's stellar artistic reputation around the world. Highlights of Small's international performance career include engagements at Carnegie Hall, Lincoln Center, Kennedy Center and Spoleto USA. His acclaimed artistry has spread further through his active YouTube channel and other videos, which have received millions of views. In addition to his online videos, Small was featured on the nationally-broadcast PBS special “A Celebration of the Piano.”

Over the course of his career, Small's contemplative nature has drawn him to music that seeks a spiritual quietude that approaches silence. His ongoing series of compositions, performances and recordings, "Journeys in Silence", reflects this interest.  Small regularly tours the United States, Europe and Japan, programming his own compositions as well as works by other composers that share this aesthetic, performing in monasteries, churches and galleries as well as more conventional concert venues. Small has received commissions from the Washington Ballet, Three Rivers Piano Competition, Georgetown Symphony and Paul Hill Chorale, among others. Small’s discography includes recordings of his own compositions as well as the Goldberg Variations by JS Bach, Musica Callada by Federico Mompou and Gershwin in Black and White (a collection of piano transcriptions) on the MSR, Naxos, Centaur and 4Tay labels. Haskell Small received his musical training at the San Francisco Conservatory and Carnegie-Mellon University. He studied piano with Leon Fleisher and William Masselos, and composition with Vincent Persichetti and Ronald Leich. Haskell Small is a faculty member and former Piano Department Chair of the Washington (DC) Conservatory of Music, where he has taught since 1984.

Duo Vis-À-Vis formed in 2016 at the Lawrence University Conservatory of Music. Their shared interests in performance and travel led them to plan their first recital tour in spring 2016. From there the duo began building relationships with venues around the country and have gone on to perform four subsequent tours across seven states. In 2017 they gave their debut international performance in Amsterdam, Netherlands. ​ “Vis-A-Vis”, in old french translates to “face to face”. The name embodies many of the duos characteristics and interests. They enjoy sharing the stories behind their music selections and forming unique musical narratives between performer and listener. The duo is currently on their sixth tour - The Viola and Piano Works of 1919. 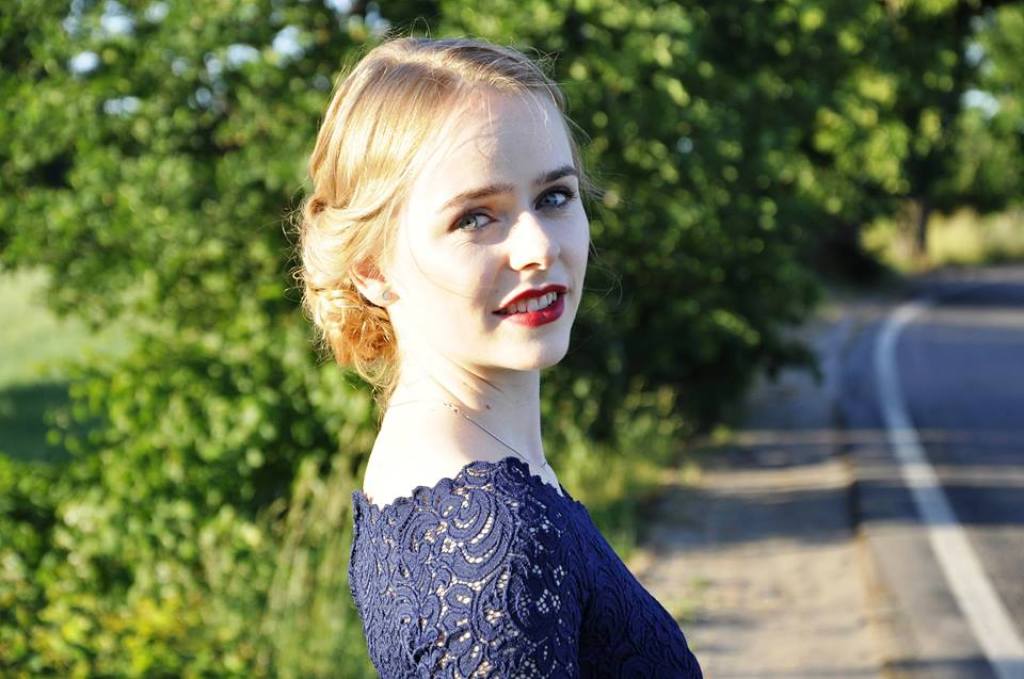 Mateusz Rzewuski was born in 1991 in Łuków. He completed with honors and with the highest mark a Master’s degree course at the Fryderyk Chopin University of Music in Warsaw in an organ class conducted by prof. Andrzej Chorosiński and Master’s Programme – Master of Music in Musikhochschule in Lubeck in an organ class under prof. Franz Danksagmüller. He is leading vivid artistic activities. He actively participated in many master classes run by: Guy Bovet, Piter van Dijk, Hans Fagius, Gerhard Gnann, Olivier Latry, Ludger Lohmann, Christophe Mantoux , Michael Radulescu, Daniel Roth, Wolfgang Zerer and many others. During international festivals Mateusz performed concerts in Poland, Germany, France, Lithuania, the Czech Republic and Slovakia. In 2011 Mateusz became a finalist of the International Festival of Sacral Music of the Reverend Stanisław Ormiński in Rumia and in the following year he also participated in archive recordings for the Polish Television.

In 2013 he became a finalist of the All-Poland Competition for Organ Improvisation in Legnica. In the same year he won first prize and was awarded special prize at the International Organ Competition “Organists of New Europe” (Organiści Nowej Europy) in Bardo. He also took part in the Erasmus student exchange programme in Musikhochschule in Lubeck, where he studied in an organ class under prof. Franz Danksagmüller. In 2015 he won II prize and was awarded a special prize at the VII International M. K. Čiurlionis Organ Competition in Vilnius. He was twice awarded a scholarship by President of the capital city of Warsaw and a scholarship by Rector of the Fryderyk Chopin University of Music in Warsaw. He was also awarded a scholarship by the Ministry of Science and won the ‘Young Poland’ (Młoda Polska) scholarship of the Ministry of Culture and National Heritage to study for a Master’s Degree in Germany for his outstanding artistic achievements. In 2013 he also initiated the Organ and Chamber Music Festival in Łuków, in which he acts as an artistic director. Currently he is studying organ and improvisation at Conservatoire à Rayonnement Régional in Paris as a part of „La cycle concertiste” course in a soloist class under prof. Christophe Mantoux.

Angelika Podwojska was born in Elmshorn (Germany). She graduated the Lutosławski State Music School in Starogard Gdański in the piano class of Ewa Gornowicz. In 2017, she graduated with honors the Secondary Music School of Fryderyk Chopin in Gdańsk, in the solo singing class of Dr. Liliany Górska. Currently she is a student of the 4th year of the vocal and acting department, direction – solo singing in the class of Dr. Anna Fabrello at the Moniuszko Academy of Music in Gdańsk. She participated in the Winter Vocal Course in Duszniki-Zdrój, in the solo singing class of Prof. Dr. Piotr Łykowski. She also took part in the interpretation course of German lyric music, conducted by Maestro Adi Bar. In 2018, she played the role of First Witch in the opera “Dido and Aeneas” by Henry Purcell at the Academy of Music in Gdańsk. This year she also created the role of Hyacinthus in the opera “Apollo and Hyacinthus” by W. A. ​​Mozart. She gave concerts as part of international festivals in Poland and Germany.

Good Shepherd Catholic Church is enormously grateful to all those who have supported and continue to support our Music Program through their presence and generous financial contributions.

For additional information about these recitals, the music ministry, the pipe organ, and the harpsichord at Good Shepherd Catholic Church in Golden Valley, Minnesota, please call the Music Office at 763-544-0416 ext. 853 or contact us via e-mail.

Are You Still Working?

Your session will expire in 60 seconds.

Your session has expired

Your time to complete the form has expired due to inactivity. Please click the button below or refresh the page with your browser and try again.